Got a Steamboat? Then put a link and pictures in here and let us know about updates etc.
Post Reply
146 posts

I'm not at Chautauqua, but I get reports from my sister that Nyitra is attracting an average of 4 boats/day (that they see) that circle around her and take pictures.

I'm looking at putting a removable sign that gives information for the curious.

Chautauqua Lake has a seaweed eater/chopper vessel that is in active use this summer. I have heard that Nyitra has already gotten confused for this seaweed eater.

I definitely plan to take Nyitra sometime and either follow from a distance for a while or something like that. Steamed Nyitra with my 12yr old nephew, as fireman from Point Chautauqua NY to Mayville NY to get ice cream and then steam back to the Point. He proved a natural using the 1/2" Chicago Injector. He demonstrated that he had paid attention and reached for the correct valve and adjusting it when the injector broke to get it to pick up again. He only got a tiny burn and didnt even blister.

Now if his uncle had realized that the firetubes were in desparate need of a brush up we might have gone at a faster speed! 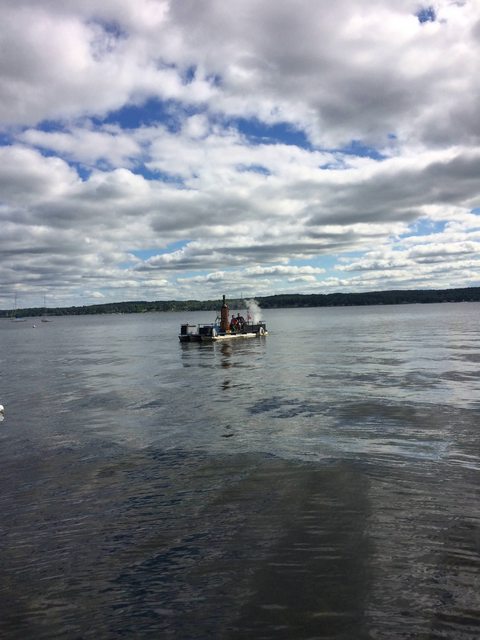 Had a race this weekend. A private race we call the "1890s Classic: Sail vs Steam". There where two legs to the race - 1.4 mile each leg - from Point Chautuauqua NY to Mayville Ny and back. Tea had to be made on the first leg to stop your time. Team steam being Nyitra, a friend who had never been a fireman before, and myself. Team sail being my friend steve, his girl friend and Circe a 22' Catalina.

The conditions were much more favorable for Team Sail this year. Just starting to get white caps most of the race. Wavey - and cutting across the starboard in the way Nyitra is least stable. Good wind, team sail was doing 3-5 knots most of the time.

Team Steam had a brand new fireman - first timer. My friend Nick. He did very well, took him a while for him to get the hang of it - but with bone dry tight grain soft maple cut into mango sized chunks, manually controlled steam draft, using both injectors (not at the same time, but you can do that!), and some pacing he was increasing the pressure every ~5min fuel/water cycle up from 50psi to 150psi average over the 1.4mile leg - so he was getting the control game. Incidentally, Nicks master thesis was in control theory - I don't know if that helped him. So we were doing 2-3 knots.

So by speed alone, Circe was faster and got to the finish line in the first leg, but ...

When we got to mayville - end of the first leg -We both forgot about the tea. - I had brought my windemere kettle. I decided to avoid the setup of windemere kettle and simply drain the sight glass. I had had a large cup of coffee before the race and really had to find a bathroom. Therefore I only put in what I sprayed out of the boiler sight glass, not a mug filled to the brim. About 1/3 full. I took a sip and then quickly walked to the gas station across the lake road to use the bathroom. In the mean time my buddy steve decided that 1/3 of a mug was not a "cup of tea" and started their little gas stove onboard. I came back and Team Sail declared victory! All in being in the interest of having fun and enjoying lower tech hobbies - he later conceded. This meant that Nyitra won the first leg!

On the way back we were using a different fuel that was wet. Wet 2x4 pine scraps - and almost ran out. Went down to 50psi, 1-2 knots at the end. Circe practically lapped us - so Steam Sail won the second leg.

For video, and pictures:
https://nyitra.blogspot.com/

P.S. Nyitra is certainly entertaining and those at Point Chautauqua seemed to enjoy the whistling. I have picked up the custom that I have always observed and participated with the Chautuauqua Belle - if the Captain/Pilot sees someone on land or in another vessel who is signaling the whistle pull signal or giving a lot of directed happy waving - from those of any age - and it seems appropriate - a whistle blast or two is given. I remember being like 5 years old waving to the Belle as she passed and she gave me a whistle!

Also if you watch the video - you can see a little bit of the oscillation of the roll of Nyitra. It can be quite intense, but it doesn't feel scary - the hulls, frame, deck, and boiler all seem to be staying together without complaint. like a buoy that's self righting.

It got a bit much with the wind from port on the way back to Point Chautauqua because of the tack and the direction the firedoor swings.The wind was blowing fine ash and glowing embers out, some across the deck into water - some caught on the stern railing and guided down the starboard side and started lighting on fire on anything that was cotton!!!

New max speed 4.5knots, at between 150-200psi. I had a little more to give but not much. The engine and jack shaft(shaft on deck) need more rigidity to make it worth trying at this speed.

I was shooting for 6mph when I built her, but 5.2mph is what I have achieved and I say that's reasonable enough for me. A good cruising speed is like 3.3knots. The exhaust draft definitely plays an increasingly important role when you are pushing the press past 150psi in Nyitra's plant.

Left Mayville today following the Chautauqua Belle! She's definitely got Nyitra beat on speed, and of course we got plagued with seaweed fouling. That's definitely a plus for the Belle as a paddlewheeler.

I had bought a few rolls of black exhaust wrap and have started another round of "keep the stuff you have worked hard to produce from Anemoi".

I'm focusing on all the pipes that stay hot all the time. So far yesterday I was able to get the long engine exhaust pipe that comes up from the deck up to the smokehood. I also wrapped some areas that I have gotten minor burns accidentally in the past.

I'm thinking about wrapping these exhaust wrap with black denim. The fiber protects you from the heat but if you touch it a bunch some of the glass/ceramic fibers can cause skin irritation. The denim should add extra insulation value.

Hi CB
what is common over this side of the pond is to wrap the hot bits in cotton or glass fibre rope and then cover in a layer of Plaster of Paris Bandage Rolls finished off with a couple of coats of white gloss paint to waterproof.

Mike Cole wrote:Hi CB
what is common over this side of the pond is to wrap the hot bits in cotton or glass fibre rope and then cover in a layer of Plaster of Paris Bandage Rolls finished off with a couple of coats of white gloss paint to waterproof.

Hmm I will consider the plaster of paris. I am shooting for black color regardless of what goes ontop of this fiber to match Nyitra's black and blue color scheme.