A Forum for the discussion of Steam Boats
https://thesteamboatingforum.net/forum/

by fredrosse
Lets say the engine with opposed pistons has two inch bore, and each crank has two inch stroke. With pistons at TDC there is only the clearance volume. At BDC each piston moves away from TDC two inches, thus engine displacement cylinder area x total four inches TDC to BDC = Pi X 4 = 12.56 cubic inches. This is the engine's displacement, and during the time period from TDC to BDC, 180 degrees of crank rotation, 12.56 cubic inches expansion occurs.

So much for the mechanical aspects of this condition, but now lets look at the thermodynamics and transport phenomenon of steam expansion in a cylinder. The rules of engine expansion say that the rate of expansion, fast or slow, does not necessarily change the wetness of steam during expansion. Steam turbines expand steam many many times faster than any reciprocating steam engine, yet that rapid expansion does not produce any extra wetness in the exhaust steam. What does matter during the relatively long period of expansion in a recip, is the heat transport, or heat transfer that so severely limits the efficiency of steam engines. Initial condensation on live steam admission, and continued condensation during expansion in the cylinder take a serious toll on engine efficiency. The faster the engine runs, the less time there is for condensation due to heat transfer, but both of the engines described above have the same time interval for extra condensation, and very nearly the same heat transfer area exposed for producing cylinder condensation, hence virtually the same performance potential.

by fredrosse
" I need one of these crankcases for each end of the cylinder. And each of them is divided along the axis of the crankshafts to make it possible to insert the crankshaft. It is not an optimal solution to have ball bearings in a split bearing block, but I'll see how it gonna work."

Why not make the main bearing end caps each as a single piece, with the square (or rectangular) tubing large enough to allow removal of the crank/rod/piston assembly without the need for a horizontal split crankcase? This is essentially the way many small two stroke engines have been configured. Then the crankshaft main bearings are not in a split bearing block. This is a solution that would be far easier to make, as well as better structural integrity, and less difficulty in reliably sealing this setup. This is at the expense of using bigger square tubing for the crankcase(s), probably not much of a penalty in this application.

by DetroiTug
Someone was talking about an engine like this a while back on the Steam car forum. There is some misconception that, the cranks will split the loading that is normally on one crank, not true, there will be two cranks with equal loading and and the same as one, and there are some disadvantages mechanically - shorter stroke equals higher loading on the rod throws for the same torque, also some sort of mechanical synchronized coupling and the associated resistance. The same for the "double the expansion area", also not so, as Fred aptly points out above. I'm not seeing any advantage to this engine design for steam?

by fredrosse
"So if there is no advantage to this engine concept, why was the airplane engine, and many submarine engines made this way?"

The only advantages I see is lower piston speed, the double crank engine has virtually half the piston speed compared to a single crank, and that represented a serious limitation on stroke/RPM considerations. Also engine balance can be much better having two crankshafts opposing each other, at the expense of all the drive gear between the cranks. Maybe the opportunity to make things more compact in certain applications. For a Diesel setup, cylinder scavenging with pure air without poppet valves, without camshafts, would offset the fact that there is similar mechanism to a typical OHC configuration, only more robust.

TriangleTom wrote: ↑
Sun Mar 31, 2019 6:00 pm
That's a really clever and fascinating design. How do you anticipate dealing with condensation in the crankcase?

Very simple, there is no crank case.

by Steam Captain
The idea with the one-piece crankcase definitely sounds like the sturdier solution. The only problem is that the crankshafts I am using have one-piece con rods, which I couldn't detach from the crankshaft. (Maybe that is why you are suggesting a bigger size of the crankcase - to have enough space to get it out with the con rod) This means I couldn't remove the crankshaft axially through 'the tunnel'.
I know it is not a mechanically smart solution, but taking the proper dimensioning for the bolts and the small size into consideration, it shouldn't be a big problem until I figure out a better solution.

To update you, I am fighting a pitched battle to make the lathe work. That is why I am delaying. The universal motor scavanged from a washing machine works, though it only turns at an unsatisfactorily slow speed. I am trying to figure out a solution for that before I can turn stuff on the lathe. But I am almost there. Be patient:)

Actually, the animation with the single-crankshaft-engine Maltelec shows on the 3. page of this thread is the thing Mike Rometer suggested n the 2nd page. I find it amazing, that people even design high rpm engines (in comparison to stereotypical steam engines anyways) with so much linkage. It looks so fragile and prone to not working in the long run. Too many moving parts for my liking. Though I might be misled. With the proper bearing sizing, material choice and shaping of the parts, it should be no problem. But I prefer the solution with 2 crankshafts.

By the way, using no crankcase is no option for me. If the engine will work as thought out, it will have rpms to the lower thousands. That means I am using the crankcase 1. as a sturdiness supplier and 2. as a means to confine the lubricant being otherwise thrown at me;)

by Steam Captain
After the input of using a one-piece crankcase, I got trapped by the idea enough to just try it out. I feared the neccessity of entirely going overboard with the dimensioning of the crankcase, but actually, even the material I originally intended to use was just big enough for the crankshafts to be navigated through.

Thus, I scrapped the divided crankcase-idea and go for the solution suggested by Fredrosse. And since I got a new angle grinder, it is not a problem to cut metal anymore:)

by Steam Captain
I am currently fidling with different pieces of steel trying to figure out a way to attach the bearing end plates to the crank case tunnel. Does anyone have a good idea to do so?

This is what I originally intended: 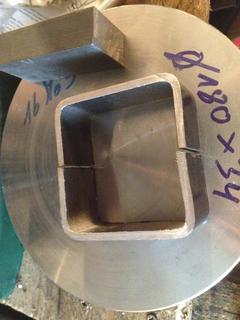 (The piece of metal I used as the table is going to be the flange for the lathe.)
These U-shaped profiles were forming the crankcase. 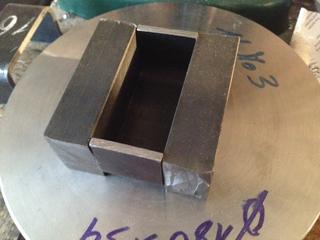 In the second picture, you can see the blocks for the ball bearings closing off the crankcase ends. 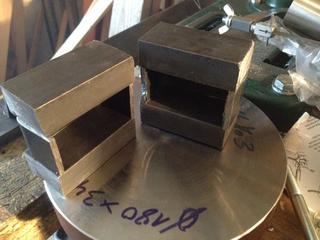 And then, they would be bolted together with holes to be drilled through the bearing blocks, creating the entire crankcase like this: 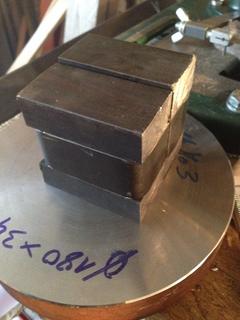 Maybe I over-engineer the engine too much and I just could go the way I showed here at that size. Maybe the split bearing end plates wouldn't be perfectly tight considering the ball bearings and simmer rings sitting in the middle of the 2-piece end plates. But maybe this wouldn't even be of such a concern with a little Loctite. I don't know. But at least this part of the engine is very easy to modify.

Ugh, I'm shifting from one solution to the other. The 1-piece end plate would need something like a flange welded to the crankcase to bolt the end plates onto its ends.The redneck fix would be to just use long bolts reaching from one end plate to the other one and tighten the nuts with the crankcase held in between like in a vice (someting to keep it at least sufficiently alligned would still be neccessary). Thought this is too redneck for me. It just wouldn't look good.

Geez, I totally burned my face welding together the lathe. I would have never thought that one can get a sunburn from welding. I knew the UV-radiation is too hard for the eyes to go without protection, but THIS really caught me off-guard. Now, buying a welding helmet before I look like a sun addict from Venice beach o.O

by Steam Captain
After finally having some time (besides legal fights with criminal troublemakers that is) and binge-watching Jay Leno, I'm still trying to figure out how I construct the intake manifold. I intend to split the cylinder liner into 2 parts which are obviously axially alligned and end on the opposing ends of the intake manifold (manifold might not be the perfect wording here, but the text should make it clear what I am talking about). The idea is to get a say 30mm thick piece of stainless/brass/bronze/aluminium with bigger dimensions than the outer diameter of the cylinder liner and with a 45mm hole machined in it. This hole is supposed to be widened to the cylinder liner's outer diameter to a few mm depth. This is to receive one end of each liner and to precisely hold them in place.

The thing I am much more concerned about here, than with the split crankcases, is the pressure. Despite the crankcases, the cylinder liners and this intake manifold connecting them is under 145 psi working pressure. I thought of maybe having relatively long sleeve ends as parts of the intake manifold, which would tightly fit over the cylinder liners for a considerable length, smear the touching surfaces with loctite and have some means to squeeze these sleeves somehow or create a shrink fit there.

Besides, I drilled all the holes in the bearing blocks and noticed my drill press considerably messes up the accuracy of the holes. The problem is, that while the drill bit is having contact with the work pieces, the drill table is bending down plus the column of the drill press is bending backwards due to the pressure on the working piece. This already ruined one piece, because it created a 2mm dislocation of the exit spot after 35mm of material drilled through. I now significantly reduced the inaccuracy by often turning the work pieces 180° after a couple of seconds of drilling. And it works, but this can't be it. How do you drill holes really orthogonally, which go through the material?

by fredrosse
"I now significantly reduced the inaccuracy by often turning the work pieces 180° after a couple of seconds of drilling. And it works, but this can't be it. How do you drill holes really orthogonally, which go through the material?"

Actually, this method is indeed "it" Drilling from both sides, with a smaller drill to start works well to locate the hole at the proper position on both ends of the piece. Drill half depth from each side with a drill 50% size, then follow through drilling with 60%, then 80%, then full size. However, having a good set of drills, and a proper rigid drill press, and the work aligned properly, is necessary if you will produce good machinery. Drill press forces that can bend the column is not usual, and sharp drills do not require very much downforce to produce a good hole.
All times are UTC
Page 4 of 5
Powered by phpBB® Forum Software © phpBB Limited
https://www.phpbb.com/