Inspiration for the builder: A list of other vertical boilers

A special section just for steam engines and boilers, as without these you may as well fit a sail.
Post Reply
3 posts • Page 1 of 1

Inspiration for the builder: A list of other vertical boilers

I've stumbled upon an article about steam boilers for locomotives, which might not sound too fitting, but the article had a chapter about vertical steam boilers, of whose designs many look like they can work in a steam boat as well. And the design of some of them is really interesting.

I tried to find an english version of the site, but it isn't all that important, because the pictures speak for themselves after all. Here is the source:

I used the names from the descriptions of the pictures, but they aren't necessarily the official names. But a researcher might find it useful to find background information about them.

Fig. 1 shows a boiler from Léon Serpollet, a pioneering inventor. The tiny pressure vessel on the right side of the boiler probably is the steam dryer.

Fig. 2 shows a boiler from De Dion-Boulton. Note the absence of plugs to access the many radial water tubes for maintenance. Long stay bolts hold the boiler together instead.

Fig. 3 The schematics of this boiler named Stolz immediately show a resemblance of the Belleville boiler, but it avoids the heavy tube plates. 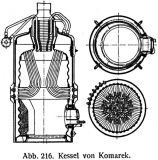 Fig. 4 This boiler used by Komarek makes use of different "smartifications". The entire fire box consists of a corrugated tube and a number of tubes hang inside the fire box.

Fig. 5 The Kittel boiler is very straight forward. Note the widening of the boiler at the height of the design water level to counteract priming.

Fig. 6 This boiler is from the Société Valentin Purrey for its steam railcars. It also looks like a deviation of the Belleville boiler, replacing the tube plates with bent tubes and thus less connections.

Fig. 7 The Great Western boiler is also a straight forward vertical fire tube boiler. Note again the use of a bigger water surface to counteract priming.

Fig. 8 I've seen this boiler in a model steam handbook but thought its shape might have been created as an adaptation to the model scale. But it did exist as a big scale version after all. This boiler from the Taff Vale Railroad looks like an inversion of a double-sided scotch marine boiler with the firebox in the center. Technically, it is a combination of a vertical and a horizontal boiler merged to a "T". A similar boiler was used by the Yorkshire Patent Steam Wagon Co. .

Fig. 9 This boiler from the danish mastermind Rowan was part of a railcar built in Great Britain and to be used in Australia. The resemblance to the Sentinel boiler is very visible, although it is bottom-fired and possesses a simpler top, lacking economizer tubes and steam dryer of a Sentinel boiler.
Top

Re: Inspiration for the builder: A list of other vertical boilers

If you are going to mention vertical boilers, don't forget the Manning Vertical FireTube boiler.

Nyitra's ASME Boiler is inspired by the Manning VFT Factory boilers that had a wider diameter in the firebox area at the bottom.

Re: Inspiration for the builder: A list of other vertical boilers

Wow, the manning boiler really takes it up a notch in built height. Perfect to spare space on your pontoon boat of which I am a big fan.
Top
Post Reply
3 posts • Page 1 of 1