Got a Steamboat? Then put a link and pictures in here and let us know about updates etc.
Post Reply
154 posts

Filled the hydraulic lines and tried the steering, I am very impressed with Hydrodrive. $350 for a hydraulic outboard system that is easily adapted to a rudder.

We steamed up in my friends pond today and gave it a test. We could almost keep going in a circle continuously in his pond.

Amongst the upgrades and repairs I'm working on I turned a brass handle free hand on my lathe for the reversing lever, drilled&tapped.

Then I buffed the heck out of it. I'm pretty happy with how it came out. 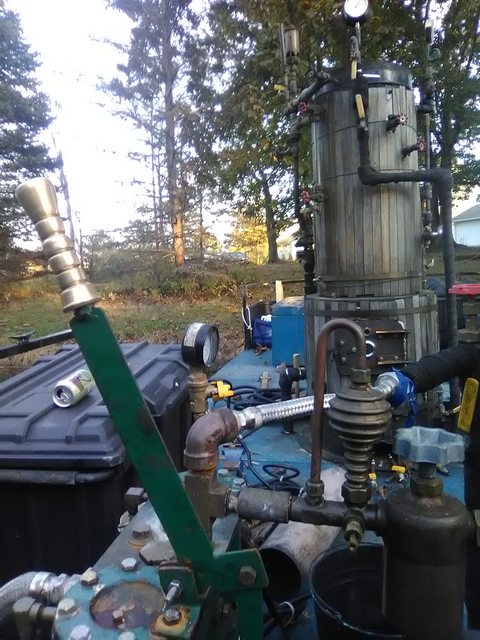 That's a nice brass handle. What did you have in there before?
Do you dry or superheat your steam at all?
~Wesley Harcourt~
Check out the steamboat and steamSHIP videos on my YouTube page: https://www.youtube.com/c/wesleyharcourtsteamandmore
Top

It didn't come with anthing but a 3/8"-16 hex bolt with a groove cut in so it could be welded to what was originally some mild steel bar stock that comprises the reversing lever- so basically a little 3/8"-16 stud.

She was a originally a car engine, and she didn't come to me that way. In the ~1960s a gentleman steamer had taken this Toledo and prepared it for use as a spare engine for his steam launch. The connections that were relevant to a car where removed and made more generic for a steam launch. He passed away before he needed it, and the man I bought it from had her stored inside in a heated indoor environment for 40years. It came to me as a crated launch engine. (eBay buy, make sure to search for local-pick only stuff if it's rare like a steam engine, and then negotiate with the seller to pay for crating and shipping.)

I had made a wood handle, but it fell apart in the outside environment Nyitra is stored.

This brass one is great, but I get nervous having too much shiny brass aboard because someone might see it and desire the brass for scrap... (Traction Engine folks have had this problem, even in locked barns...)
--

Well my MAWP is 200PSI. I am blessed with experiencing the huge change that happens between 150PSI going to 200PSI. The steam becomes more or less dry, and the power goes through the roof. It also is a very odd phenomenon because going from 50-150psi seems to takes a lot of effort fueling with wood. Once you get to 150PSI it takes off to 200psi much quicker because the puffer gets more blow-by. - like a turbo spooling up on a d_i_e_s_e_l.

Also, if it's wavy carry-over can becomes more of a problem with such a high center of gravity, so what I do is run the water level maybe 50% of the Glass, and make that the set point with the fireman. Keeping the water-glass near 50% combats carry-over but it also makes drier steam - especially above 150psi.

It starts to get complicated with multiple fuels. the propane flame is going fast enough through the boiler, so I don't plan on doing a puffer arrangement while running propane.

Also for efficiency, and because it was done - Nyitra now has an Auxilliary Sail.

However, I will not run my aux sail when we are firing with solid fuels - because that is how many steamboats ended up sinking...

To prevent further involuntary stack contributions to Lake Chautauqua a new SS 5ft (2ft taller then previous) smoke stack and modifications to the bonnet were completed.

My first time with weld nuts. I like them a lot, however I'm guessing because of the rough environment this maybe a permanent mating between the stack and bonnet.

4 1/4"-20 weldnuts were welded to the bonnet with oxy/acetylene welding, then grinding, sanding, painting. 1/4"-20 grade 8 bolts were used, and some ss acorn nuts to finish it off.

I'm not painting the stainless steel, at least initially . I want to see how the thermal gradient looks as the steel will change specific colours that correlate to fairly specific temperatures.

Looking forward to seeing your multi-coloured dream stack next season. Are you planning any other improvements over the winter?
~Wesley Harcourt~
Check out the steamboat and steamSHIP videos on my YouTube page: https://www.youtube.com/c/wesleyharcourtsteamandmore
Top

Didn't even see this until now. The stack did develop a little straw color, but it's not as dramatic as I would have hoped.

With the COVID lockdown I did manage to steam for 5hrs on Lake Chippewa in 2020.

I'm building towards a longer multiday trip, but I haven't really been ready with Nyitra, and of course the pandemic didn't help things. I'm going to be vaccinated in a few days, hopefully that will enable me to take Nyitra to Chautauqua this summer. My nieces and nephews haven't had a ride recently, and Nyitra hasn't been to Chautauqua for several years.

I recently did my yearly hydro and steamed up with a new atomizing bus, an adjustable steam pressure regulates the steam to 35psi for the two kerosene nozzles(I'm switching from Chinese 2.5mm to USA Delavan, for my recent land steaming I seem to have had more then enough BTUs available. Before there is steam, propane can be used for atomization and then switched over to steam. I'm still not satisfied 100% with kerosene from the perspective of flameouts. Some firebox targets work, but I'm still learning and I'm probably going to try to make a very simple cylindrical flameholder.

I don't think I mentioned it online yet specifically, but one of the necessary repairs was a real hair-raiser for me - the Toledo engine had too many damaged threads on the cylinder cover boltholes in the cast iron block, enough that the engine was not able to run without way too much steam leaking(too darn loud).

With the help of my buddy I was able to successfully drill & tap 16 holes on the Toledo engine to a slightly larger more aggressive heli-coil thread form that with with the spring heli-coil inserts can hold stronger then the original bolts.

No more serious steam leaks from the engine, 15/16 of the bolts are holding very strong on the cylinder covers. The last bolt is holding, but not well enough, luckily the other bolts around it can do the job. I've had just under 10hrs steaming and the repair seems to have been completely successful.

If I had messed that machining up I'd be looking for a new engine right now. Luckily someone was watching, and the Toledo still lives strong!

It's interesting that the stack apparently is seeing roughly the same temperature range of the steam I see on the boiler water temp gauge.

If this is true, it makes sense, the puffer exhaust mixes with the combustion remains in the bonnet, sometimes a manual steam nozzle in the bonnet is used for firing up to pressure and whenever extra draft is needed.

Steamed from Mayville Public boat ramp to home port at Point Chautauqua on Lake Chautauqua in western New York state today after trailering 3hrs from Ohio. Next to me in the background is the Chautauqua Belle a paddle steamer.

It was a long day, but in the end Nyitra did 200miles on the highway, and a mile or so across Chautauqua under her own power.